Since 2012, Principle Gallery has proudly exhibited the artwork of Teresa Oaxaca, an upcoming artist in the D.C. area.  At a young age, Teresa has already gained international recognition for her alla prima portraiture and Baroque and Victorian influenced style. Teresa’s latest accomplishment–painting the cover art for Nate Ruess’ new album, Grand Romantic–proves her growing respect in the artistic community.

Grand Romantic is Nate’s first solo album. He also sings lead vocals for the indie pop band fun., which won two Grammy Awards in 2013 for Best New Artist and Song of the Year. In his pursuit of a solo career, Nate was determined to have an album cover that would capture the emotional themes of his music. According to Nate, Teresa did just that in her portrait of him. 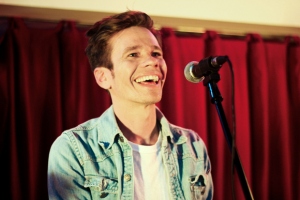 Teresa and Nate’s collaboration came about somewhat randomly. Nate recalls searching the Internet for cover art inspiration and coming across one of Teresa’s portraits: “[Teresa’s portrait] blew me away.” Soon after, Nate was determined to have Teresa paint his portrait for Grand Romantic‘s cover. At the time, though, the cover had to be completed within two weeks and Nate was traveling to Europe later that week. Despite the time crunch, Teresa and Nate were able to meet at her studio in Arlington, Virginia several days later. There, Nate posed for about 1,000 photos with some of Teresa’s standard props, including antique dolls, balloons, and tea trays. After agreeing upon a photo to use as a base for the portrait, Teresa got to work. For two weeks, Teresa painted “furiously into the night,” as she said on her Facebook page. 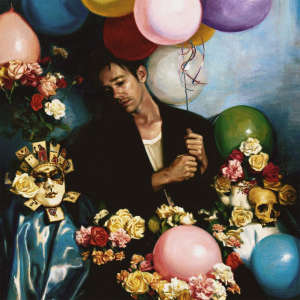 Both artists were overjoyed with the product and loved working with one another. On Facebook, Nate wrote that Teresa “did an amazing job of capturing my emotions and putting an incredible visual stamp on something that means the world to me.” On her page, Teresa described Nate fondly: “an amazing model and a fantastic and inspiring person.”

Since the debut of the Grand Romantic cover on Nate’s Facebook, Teresa’s painting has appeared on The Tonight Show with Jimmy Fallon, when Nate performed the album’s lead single, “Nothing Without Love.” Watch the clip!

Be sure to pick up Nate’s new album (available on June 16th) for some great new music and wonderful cover art.