Apologies! Due to a technical error, this post is up a couple days late, but please enjoy!

The term “sgraffito” comes from the Italian word meaning “scratched.” It’s a technique that is usually applied to either wall decor, both interior and exterior, or to pottery. Essentially, the basic idea is that multiple layers of plaster or glaze are applied, and the top layer is methodically scratched through to reveal the contrasting layer beneath. This scratching is usually done in such a way as to form a pattern or an image using the two contrasting layers.

Sgraffito has been around quite a while, in all parts of the world. Check out some examples of it on pottery below– including Navajo pottery, ancient Greek ceramics, and African pottery.

The technique also experienced popularity as wall decor or part of a building facade in Europe, since classical times. As with many artistic techniques, it saw an increase in popularity in the 15th and 16th century in Italy, particularly in Italy, Germany, Austria, and Transylvania, and later experienced a revival during the Art Nouveau movement of the early 20th century. Below are some examples, including an Italian Renaissance-era sgraffito building, a hammer-and-sickle sgraffito design on a Czech building, and an Art Nouveau facade on a building in Barcelona.

The sgraffito examples we’re going to showcase today from Principle Gallery are in fact neither pottery nor wall decor, but rather paintings! Jeff Erickson‘s unique, highly abstracted paintings are eye-catching and full of texture, depth, and visual interest, and part of this is due to his creative use of sgraffito!

Oil paint straight from the tube is extremely thick and not terribly “workable,” so most artists use some kind of solvent to help thin the paint and make it more spreadable on the painting surface, in addition to helping it dry a bit faster. This substance added to the paint is called the “medium” (this can be confusing, because “medium” has multiple meanings when talking about art, but think of it as synonymous with “additive”) and while most artists use linseed oil, turpentine, poppy oil, or similar mediums, some artists, like Jeff Erickson, use something called a cold wax medium.

The cold wax medium is pretty much what it sounds like– it is an additive containing beeswax that can be used cold (as opposed to encaustic, a different technique in which the wax is heated– but we’ll save that for another Tuesday!) and in addition to aiding in workability and drying time, cold wax medium gives the artist a few different options for building unique textures and layers as well! In Jeff’s case, it allows for some really cool sgraffito. You can see some examples of Jeff’s unique paintings below, but trust us– they are best viewed in person, so come on by the gallery and see them, and many more in this month’s Local Art, Local Eats exhibition, on display now! 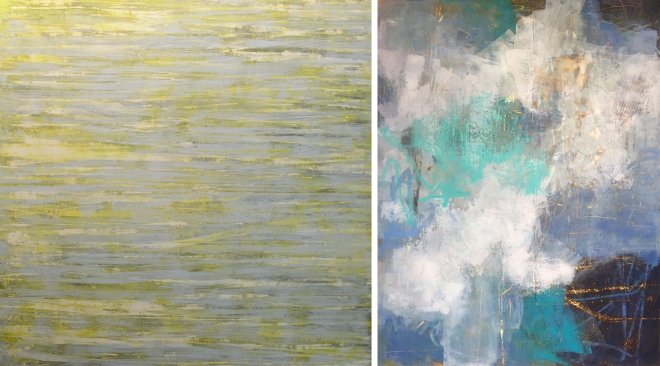