Simply put, a nocturne is a painting of a night scene. James Abbott McNeill Whistler was the first to apply the term to paintings (it is originally a descriptor of a piece of music whose composition is evocative of nighttime) and in art circles, the word has come to refer to any scene that depicts the landscape or subjects as they appear during twilight or the darkness of nighttime.

Whistler may have been the first to apply the term “nocturne” to paintings, and he did go on to paint a beautiful series of nocturnes in the nineteenth century, but he’s certainly not the first to paint a night scene! Artists during the early Renaissance began to use night scenes to depict Biblical scenes, and by the 16th and 17th centuries, the practice had broadened to include painting a large variety of subject matter in a nighttime light. One notable example is Rembrandt van Rijn’s masterpiece, “The Night Watch.” Rembrandt was among the first artists to paint night scenes on a regular basis, and “The Night Watch” was particularly celebrated for its colossal size (nearly 12 x 15 feet!) and its unusual depiction of a military portrait. Many artists throughout the centuries have continued to paint night scenes, enjoying the challenge it brings as well as the evocative mood set by the lighting.

We at Principle Gallery show many different artists who are incredibly talented at painting night scenes, and some who paint them quite often! Here’s a collage of crops of some of the fantastic nocturnes at the gallery:

One of the undisputed masters of the night scene, Jeremy Mann, will be featured in an upcoming solo exhibition that opens here on November 13th, followed by a live cityscape painting demonstration in the gallery on November 14th from 1-4PM! We can hardly contain our excitement over the exhibition and the demonstration, and that excitement is only growing as we receive more images of the 35 brand new paintings (both cityscapes and figurative works) that will be part of the show! Here are just a couple of fantastic examples of what Jeremy can do with a night scene: 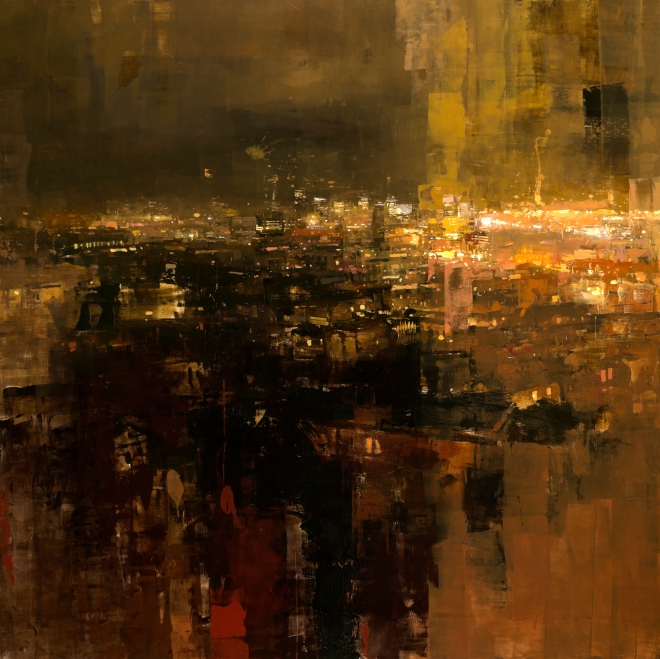 Stay tuned as the show approaches for more sneak peeks at the paintings from the exhibition! And if you’d like to be put on the list to receive a full digital preview of the show, just send us an email at info@principlegallery.com!