Another Tuesday, another technique! With our upcoming Friday exhibition Graceful Subtleties displaying works inspired by the Old Masters, we thought it only fitting to touch on a technique prevalent during the Renaissance era – etching.

Commonly considered as a method of printmaking, etching is the process in which an acid or mortant is used to carve into a metallic material, such as copper, zinc, or steel. More specifically, etching is a form of intaglio, an ancient Italian method where a design is incised into a surface and the resulting depressions then hold a wet medium. To put it in perspective, intalgio is the opposite of relief printmaking. Remember covering a coin with paper and coloring over it to see its impression? That’s relief printmaking in the simplest of forms!

Now back to etching! Usually the metal is primed with a wax material, or “ground,” that acid cannot disintegrate. From there, the artist creates a design with an etching needle or a concaved, scooping utensil called an echoppe. After the image is made satisfactory, the metal is dipped into an acidic solution and dissolves, deepening the incised lines and cuts. The remaining ground material is wiped away, revealing the ultimate design. Ink or another wet medium is then poured into the depressions of the metal; thereafter, paper is placed on top of the metal plate and pressed together typically by a high-pressure printing press. The result is an ink design on paper that can be replicated a number of times without any variation in design.

There is much debate on where and when etching exactly originated. This technique is said to have been brought about when the Italians, and later Germans, began to create intricate designs on their armor during the Middle Ages. However, the majority believe Daniel Hopfer to be the original discoverer of etching placed on paper in the 1500s, having been inspired earlier by Johannes Gutenburg’s printing press in the 1450s. Later, it became a form of craftsmanship for blacksmiths and other artists whose work revolved around collectible, refined houseware, like fine silverware.

Typically when you think of engraving and art history, Albrecht Durer is the first artist to pop in your head. Though he is deeply associated with engraving and other printmaking methods, there are many other Old Masters who specifically practiced etching as opposed to engraving. For example, Rembrandt produced etchings, often times  for self-portraits. Other examples include Leonardo da Vinci and Antonio Pollaiuolo, whose work titled “Battle of the Nude Men,” you may recognize. 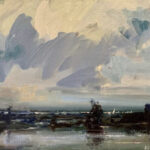 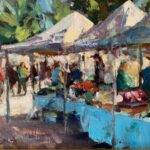 Another prominent figure to have produced etchings is the Spanish Romantic artist, Francisco Goya, who is considered to be the last Old Master. The most notable work of his is “The Sleep of Reason Produces Monsters,” where he has visually translated a dream symbolizing his frustration and torment of Spanish society. Below is his prepatory drawing alongside his ultimate etching. 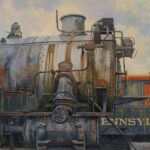 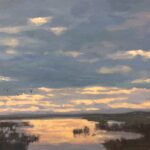 On the rare occassion, Principle Gallery has the pleasure of displaying works on paper, and lately, they so happen to be etchings! Paula Rubino and Charles Weed both have dipped into this technique in such a masterful way that we highly encourage you to view their works in person. For our upcoming show Graceful Subtleties, Charles Weed has prepared an etching titled “Man in Profile,” which features a style similar to those of the Old Masters’.

Now that you have an understanding of etching, come apply your newly acquired knowledge to the pieces at the show this Friday at 6:30PM! All are welcome and free to enjoy the art, fine refreshments, and hors d’oeuvres. Feel free to contact the gallery if you would like any more information regarding the show, our artists, or their works!