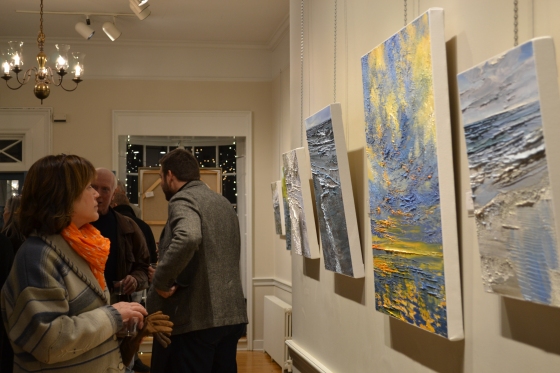 A guest looking upon the new arrivals of Lynn Boggess at his Friday night Solo Show.

What a great show we had this weekend! But, if you missed out, don’t fret because we’re going to tell you all about it. Friday night, we welcomed all the new arrivals by Lynn Boggess, including some night scenes that actually arrived that morning – one canvas was still wet with paint!

We were also very pleased to have Lynn give a live demonstration for one of his night paintings earlier Saturday afternoon! He, first, started off with explaining how he came about painting, having been inspired during his undergraduate studies of abstract expressionism and working en plein air.

His reasoning behind why he moved outdoors was that, “If you stayed within four walls, all you will ever do is learn to paint those four walls.”

Continuing this journey of artistic experimentation, he tested cement trowels in lieu of brushes and knew right then that this method would be the kicker. Lynn also discussed which types and colors of paints he typically uses, noting that turquoise is one color he tries to incorporate in all his works. 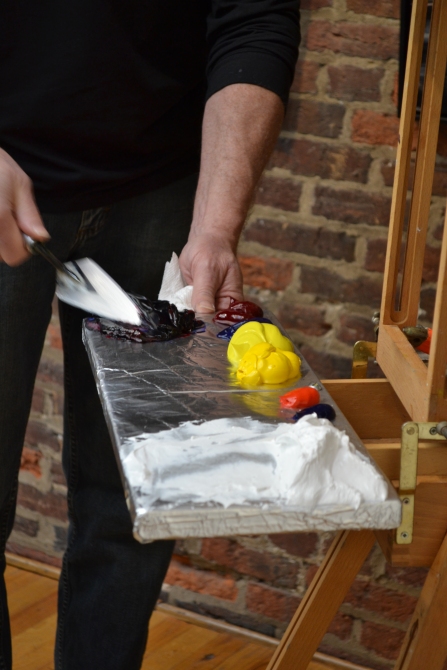 After his introduction, Lynn explained the origin of his inspiration for today’s piece – one that came to him during a short walk on the waterfront in Alexandria minutes before his demonstration! The artist then began mixing the enormous globs of paint, all the while joking about the astonished reactions of his suppliers when ordering the needed amount of paint for his works – a great deal as you can tell from the picture…

He then applied two layers of violet-black paint for the “skin” of the canvas. This layer was intended for the night sky as well as the darker tones for shadows when unearthed later by his subtractive/pulling away method. Once having applied the “skin,” Lynn mixed and applied the blues and yellows in such a way to give the grassy middle-ground some texture; this was achieved by what he calls “cracking” the paint (gently tapping the canvas with the paint-filled trowel). Afterwards, the snow was added by slow, smooth gestures upward on top of the green middle-ground. 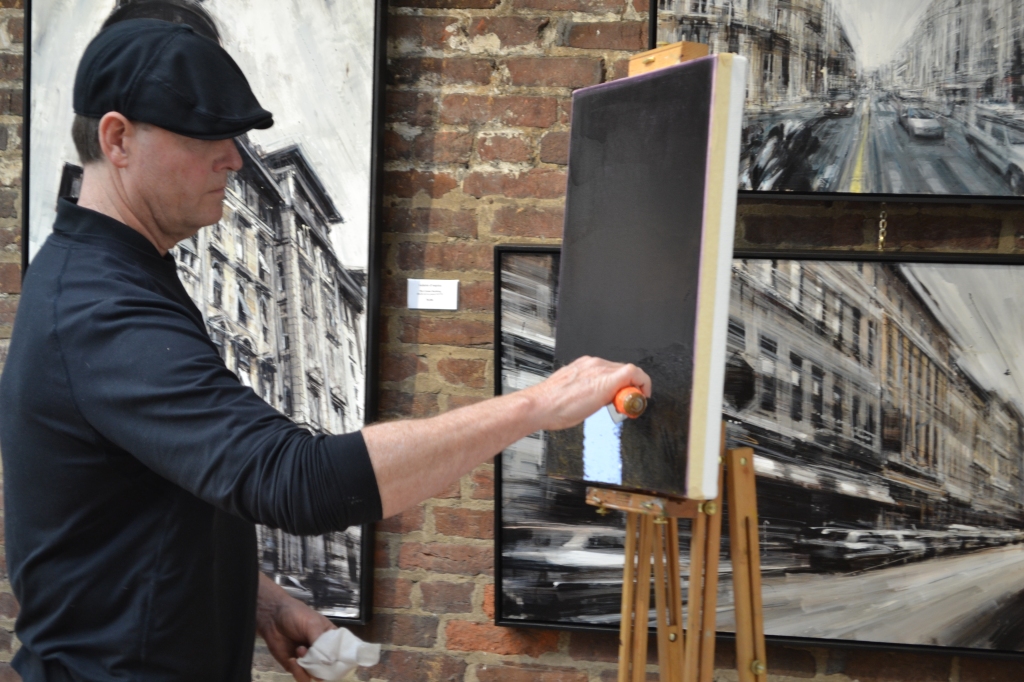 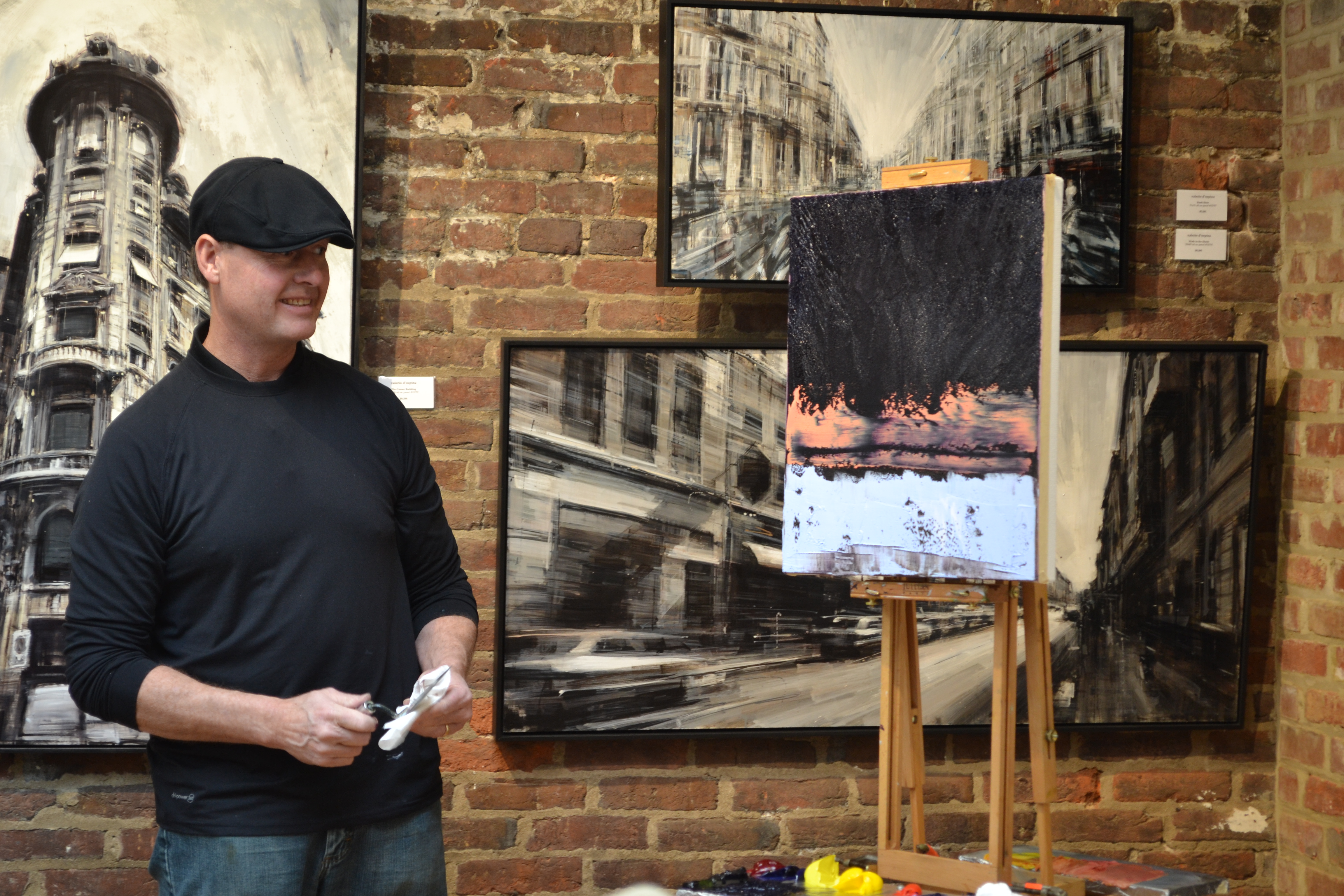 Lynn pausing as the audience was consumed with awe by the painted sunrise.

Though unintentional, the linear gap produced between the yellow-orange forms is what Lynn explained as the most essential part of his work – that unexpected formations, such as the linear gap, are direct parallels to the disorderly, chaotic nature scenes he paints. The artist also commented that if he were to step back, look too long, and readjust his painting, he would create an organized re-presentation of nature, the complete opposite of what nature actually is. So, Lynn worked with this very natural, quite unexpected addition by turning it into the forest infested horizon line.

Having painted the horizon, he decided to recreate the night sky he sees from his West Virginian studio – a dark sky completely filled with the stars of the Milky Way. To add stars as well as a personalized constellation, he used the tip of the cement trowel with very little paint upon it. With some last finishing touches, the beautiful night sky was finally complete after only an hour! 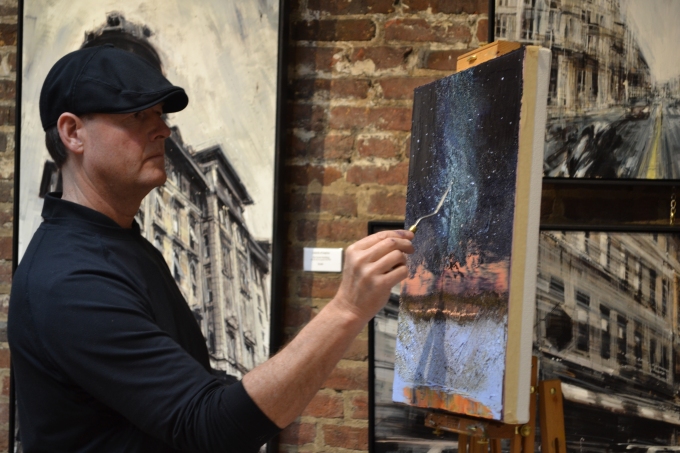 The artist added astronomical elements to his piece by using the tip of the cement trowel.

All in all, Lynn Boggess’s live demo was a very inspirational presentation for viewers and artists alike. The resulted work, “20 February 2016,” is now proudly displayed at Principle Gallery and is available for purchase.

For more information concerning Lynn Boggess, his works, or Principle Gallery, stop by the gallery or the gallery’s website! 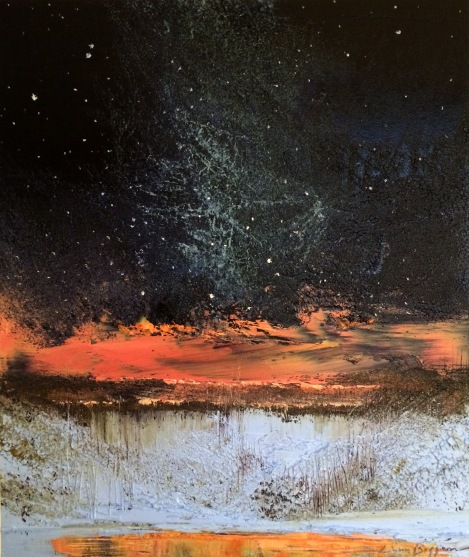