Well, we can officially say that summer has arrived! However, here in Alexandria it has felt like summer since about.. April. Therefore, because Mother Nature decided to skip over Spring and bring us this sometimes enjoyable, yet other times torturous heat. We thought we’d discuss the gift Spring typically brings… flowers! Today, we’ll discuss how floral’s became a leading subject in ancient, traditional, medieval, modern, and contemporary art.

The incorporation of floral motifs within works of art began decades ago. Many civilizations engraved blooms and blossoms into their ceramics, painted them upon structures, and wore them as accessories. A significant example would be the Egyptians, who used the lotus flower in their painted murals and ceramics as well as blooms that were inlaid into ceremonial jewelry. The Egyptians believed that the lotus flower was a representation of the sun and had strong ties to human creation as well as rebirth.

Above is a floral necklace that was excavated from the tomb of Tutankhamun. Blue lotus pedals were inlaid into the collar, along with other types of plants.

When the lotus flower was painted and engraved onto ceramics the lotus was rendered in a consistent yet stylized way.

As you can see in the fragment above, the lotus resembles a fan and this particular stylization remained prevalent throughout Egyptian art. 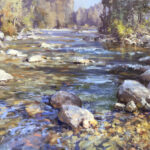 During the Renaissance, artists began perfecting still-life paintings, which then became extremely popular subjects. Some of the earliest examples of floral still-life painting comes from the Northern Renaissance because during this period there was a major increase in the study of flowers and the creation of botanical publications. According to the Metropolitan Museum of Art, Renaissance artists “typically combined flowers from different countries and even different continents in one vase and at one moment of blooming” to represent the worldwide rise of interest in flowers and botanical’s.

Flowers in a Wooden Vessel by Jan Brueghel the Elder, 1603

Flowers in a Ceramic Vase by Jan Brueghel the Elder, 1620

During Impressionism, painters utilized the floral motif in a variety of ways. Some neglected the still-life and showcased flowers as arranged bouquet’s behind figures, surroundings to plein air figure paintings, or as floral backdrops.

The Two Sisters, On the Terrace
by Pierre-Auguste Renoir, 1881

However, one artist in particular did things a little differently, his name is Claude Monet. He created paintings that solely focused on capturing the feelings of nature. Monet painted flowers in the style of still-life and he painted them as they appear in nature.

Monet masterfully captured the peace and serenity that is associated with flowers. His appearance of soft brushstrokes, soothing colors, and glowing light creates a movement as well as a narrative. Also, the artist’s care and respect for his subjects translates to the viewer. In his own words he expressed his gratitude and love for flowers; “I must have flowers always and always.”

Bridge over a Pond of Water Lilies by Claude Monet, 1899, oil on canvas

Recently we received 3 brand new floral, still-life scenes from our regular artist, Elizabeth Floyd, who specializes in still-life and landscapes. Floyd is a former architect who chose to abandon her 9 year career and pursue her true passion.. painting.

Floyd’s floral still-lifes are paintings of flowers she grows herself. She has a spectacular garden and selects flowers from her collection and creates stunning compositions.

So here we are, in June of 2018 and floral’s still remain present and popular in the world of art. There is something about the way flowers resonate with viewers and many find themselves desperate to have floral paintings in their home.

Featured above are the 3 new Floyd’s that are currently available! If you enjoy the work of Elizabeth Floyd click here to see more of her wonderul works. Also, Liz Floyd was just featured in Elan Magazine and one of figure works of her daughter is gracing the cover. You can read the entire article if you click here, you can find the piece on Liz from pages 30-33.

If you are interested in any of Liz Floyd’s work featured here or on our website please don’t hesitate to email us: info@principlegallery.com